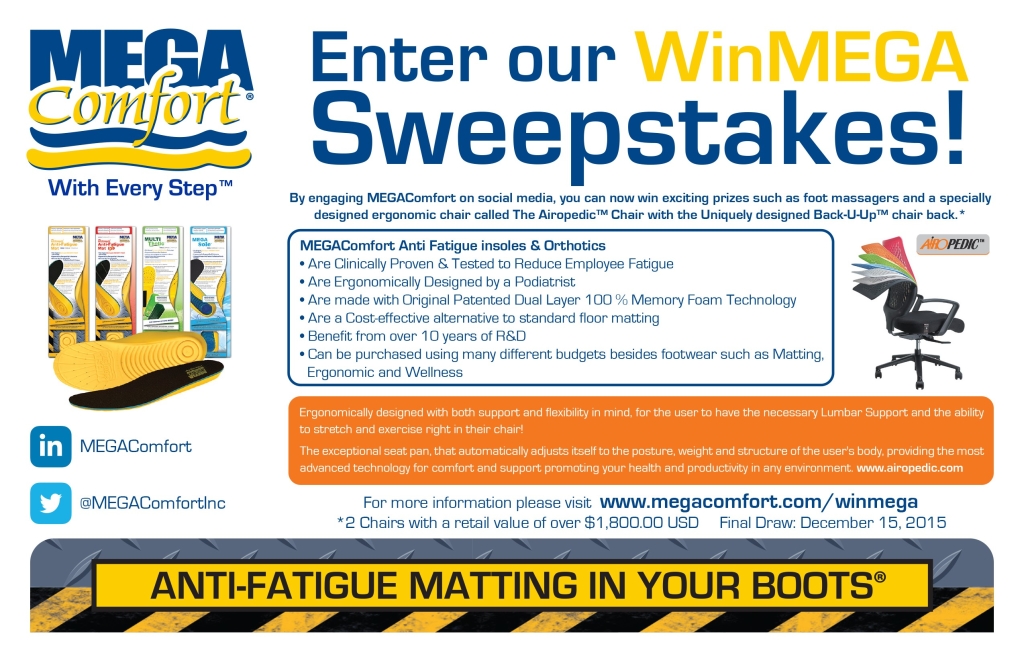 NO PURCHASE IS NECESSARY TO ENTER, PLAY, OR WIN A PRIZE. A PURCHASE WILL NOT IMPROVE YOUR CHANCES OF WINNING. INTERNET ACCESS AND A VALID EMAIL ADDRESS ARE REQUIRED TO PARTICIPATE, UNLESS USING THE ALTERNATIVE MEANS OF ENTRY.

WINNER(S) MAY BE REQUIRED TO PARTICIPATE IN THE PRIZE FULFILLMENT PROCESS AND SIGN DOCUMENTS, SUCH AS A RELEASE, AS DETAILED BELOW.

BY PARTICIPATING, YOU AGREE TO THESE OFFICIAL RULES, WHICH ARE A CONTRACT. WITHOUT LIMITATION, THIS CONTRACT INCLUDES INDEMNITIES TO THE SPONSOR (DEFINED BELOW) FROM YOU AND A LIMITATION OF YOUR RIGHTS AND REMEDIES. THESE RULES CONTAIN ARBITRATION AND DISPUTE RESOLUTION PROVISIONS THAT AFFECT THE WAY IN WHICH ANY CLAIM OR DISPUTE BETWEEN YOU AND THE SPONSOR WILL BE RESOLVED. SCROLL DOWN TO SECTION 9 TO SEE THE ARBITRATION AND DISPUTE RESOLUTION PROVISIONS.

THIS PROMOTION IS VOID WHERE PROHIBITED OR EXCLUDED.

1. PROMOTION DESCRIPTION. The MEGACOMFORT INC. (“MEGAComfort”) SWEEPSTAKES consists of an online sweepstakes (the “Sweepstakes”) in the 50 United States and the District of Columbia (the “Territory”) that begins at 12:01 AM EDT on August 24, 2015, and ends on December 15, 2015 at 11:59 PM EST (the “Sweepstakes Period”). Void in Puerto Rico and where prohibited. The Sweepstakes is governed by these Official Rules.

2. WHO IS ELIGIBLE TO PLAY/TO WIN.

There are three (3) ways to enter.

C. Without Participating Online (alternate method of entry, “AMOE”). A Participant can enter the Sweepstakes without having to complete any online entry method described herein by legibly handwriting your complete name, mailing address, phone number, email, and age on an 3-inch by 5-inch white piece of paper, and mailing in a #10 business size envelope, with proper postage prepaid, to MegaComfort, Inc., Sweepstakes Entry, 14351 Myford Road, Suite F, Tustin, CA 92780. All mailed entries must be postmarked by December 3, 2015 and received by December 15, 2015. Envelopes must be hand written. One entry per eligible Participant is permitted during the Sweepstakes Period using this method. Typed or illegible entries will be disqualified. Sponsor is not responsible for lost, delayed, or misdirected mail. Any entry provided through the AMOE method that lacks sufficient postage will be disqualified. Proof of submission will not be deemed proof of receipt by Sponsor. No mechanical reproductions will be accepted. AMOE entries must contain all entry fields to be eligible, otherwise the entry is void.

4. SWEEPSTAKES – PRIZES/ODDS/DETAILS. The odds of winning a prize in the Sweepstakes will depend on the actual number of valid entries received. Four (4) prizes total are available for distribution in the Territory. The total approximate retail value (“ARV”) for the Sweepstakes prizes is $1,950.00 (US)

Prizes will be awarded as follows:

The potential winner will be contacted via LinkedIn Mail, Twitter Direct message, or the email provided in their entry, depending on the method of entry, within two (2) business days after the drawing, and the potential winner will be required to complete and return Prize Claim Documents within five (5) business days, or the time period stated in the notification, or the potential winner may be disqualified and forfeit the prize. Sponsor may, at its sole and absolute discretion, select an alternative potential winner should any potential winner be disqualified. Sponsor will pay for standard delivery of all prizes in the Sweepstakes. The prizewinner shall solely be responsible for all federal, state, and/or local taxes and other fees associated with prize receipt and/or use. The prize may not be assigned or changed except at the sole and absolute discretion of Sponsor. No Participant may receive more than one (1) prize in the Sweepstakes.

5. PRIZE CLAIM DOCUMENTS. The Prize Claim Documents may include, but are not limited to: a Declaration or Affidavit of Eligibility (as solely determined by Sponsor), Release of Liability and, where lawful, a Publicity Release, a Federal IRS form W-9 for tax filing purposes (for the year a prize is received), and such other documents as may be determined by Sponsor. All Prize Claim Documents must be returned as provided in the directions to the potential winner. Prizes that require shipping to the winner will ship approximately four to six weeks from date of verification. If verification results in forfeiture, you will not receive the prize. Upon prize forfeiture, no compensation will be given.

6. RELEASE. By receipt of any prize, winners agree to release and hold harmless Sponsor, LinkedIn Corporation, Twitter, Inc., and any other third-party providers or their respective subsidiaries, affiliates, suppliers, distributors, advertising/promotion agencies, and prize suppliers, and each of their respective parent companies and each such company’s officers, directors, employees and agents (collectively, the “Released Parties”) from and against any claim or cause of action, including, but not limited to, personal injury, death, or damage to or loss of property, arising out of participation in the Sweepstakes or receipt or use or misuse of any prize.

Sponsor’s computer is the official timekeeping device for the Sweepstakes. No automated entry devices, bots, spiders, mechanisms, programs, or otherwise are permitted. Sponsor is not responsible for lost, late, incomplete, invalid, illegible, misdirected, or otherwise non-received entries. Entries may not be acknowledged or returned.

8. LIMITATIONS OF LIABILITY. All entries become the sole and exclusive property of the Sponsor. The Released Parties are not responsible for: (1) any incorrect or inaccurate information, whether caused by entrants, printing errors or by any of the equipment or programming associated with or utilized in the Promotion; (2) technical failures of any kind, including, but not limited to malfunctions, interruptions, or disconnections in phone lines or network hardware or software; (3) unauthorized human intervention in any part of the entry process or the Promotion; (4) technical or human error which may occur in the administration of the Promotion or the processing of entries; (5) late, lost, undeliverable, damaged or stolen mail; or (6) any injury or damage to persons or property which may be caused, directly or indirectly, in whole or in part, from entrant’s participation in the Promotion or receipt or use or misuse of any prize. If for any reason an entrant’s entry is confirmed to have been erroneously deleted, lost, or otherwise destroyed or corrupted, entrant’s sole remedy is another entry in the Promotion, if it is possible. No more than the stated number of prizes will be awarded. In the event that production, technical, seeding, programming or any other reasons cause more than the stated number of prizes as set forth in these Official Rules to be available and/or claimed, Sponsor reserves the right to award only the stated number of prizes by a random drawing among all legitimate, un-awarded, eligible prize claims.

PLEASE READ THIS SECTION CAREFULLY. IT AFFECTS THE WAY IN WHICH ANY CLAIM OR DISPUTE BETWEEN YOU AND THE SPONSOR IS RESOLVED.

A.       Governing Law. Unless the laws of your jurisdiction require that the laws of that jurisdiction govern, in which case the laws of such jurisdiction shall govern, all claims arising out of the Sweepstakes and all issues and matters concerning the construction, validity, interpretation, and enforceability of these Official Rules, or the rights of Participant(s), shall be governed by and construed in accordance with the laws of the State of California and the United States of America, without regard to conflict of laws principles. Any and all disputes, claims, and causes of action arising out of, or connected with, the Sweepstakes shall be resolved individually, without resort to any form of class action.

B.       Process. Any claim, controversy, or dispute (whether in contract, tort, or otherwise) arising directly or indirectly out of or related to the Sweepstakes shall be resolved exclusively by a final and binding arbitration administered by the American Arbitration Association (the “AAA”) and conducted before a sole arbitrator pursuant to the applicable Rules and Procedures established by the AAA. This arbitration agreement is made pursuant to a transaction involving interstate commerce, and shall be governed by the Federal Arbitration Act (the “FAA”), 9 U.S.C. §§ 1-16. The arbitration shall be conducted in the English language. The arbitration shall be held at a location determined by the AAA pursuant to the Rules and Procedures (provided such location is reasonably convenient for Participant), or at such a location as may be mutually agreed by the Participant and Sponsor. The arbitrator’s decision shall be controlled by the terms and conditions of these Official Rules and any of the other agreements referenced herein that the Participant may have entered into in connection with the Sweepstakes. The arbitrator shall apply the laws of the State of California consistent with the FAA and applicable statutes of limitations, and shall honor claims of privilege recognized at law. To the extent permitted by law, the arbitrator shall not have the power or authority to award consequential, incidental, or punitive damages against the Participant or Sponsor.

C.       No Class Action or Consolidated Proceedings. ANY ARBITRATION THAT OCCURS WILL TAKE PLACE ON AN INDIVIDUAL BASIS. CLASS ARBITRATIONS, CLASS ACTION SUITS OR CONSOLIDATED PROCEEDINGS ARE NOT PERMITTED AS A WAY TO RESOLVE ANY CLAIM OR DISPUTE.

D.       Scope. This agreement to arbitrate claims and disputes is intended to be broad and includes, without limitation, (i) claims or disputes relating to any aspect of the Sweepstakes, whether based in contract, tort, statute or any other legal theory, (ii) claims or disputes directly or indirectly arising from conduct or events that occurred prior to the effective date of these Rules (including, without limitation, claims relating to advertising), or after its termination, (iii) claims or disputes subject to class action litigation in which you are not currently a member of a certified class, and (iv) claims or disputes with any agent, employee, successor or assign of you, the Sponsor, or the Administrator (all such claims and disputes are referred to collectively as “Claims”). This agreement to arbitrate does not, however, include Claims pertaining to intellectual property rights.

E.        No Preclusive Effect. No award or finding or stipulation of fact by the arbitrator will have any preclusive or collateral estoppel effect in any other arbitration or court, unless it involves the exact same parties.

10. PUBLICITY AND PRIVACY. Except where prohibited, participation in the Sweepstakes constitutes each winner’s consent to Sponsor’s use of winner’s name, likeness, photograph, voice, opinions and/or hometown and state for promotional purposes in any media, worldwide, without further payment or consideration. Except as just stated, information collected from entrants is subject to Sponsor’s Privacy Policy.

11. WINNERS LIST. For a list of Official Winners (the “List”), mail a #10 Self-Addressed Stamped Envelope to MEGAComfort, Inc., ATTN: SWEEPSTAKES, 14351 Myford Road, Suite F, Tustin, CA 92780, or look at www.megacomfort.com/winmega. All requests must be postmarked by April 15, 2016, and received by April 30, 2016. Limit one (1) request per outer envelope. The list will be available after February 15, 2016, and will be sent when the Sweepstakes is officially over and all winners have been verified. Vermont residents may make this request without a self-addressed stamped envelope.

© 2015 MEGAComfort, Inc. MEGAComfort and the MEGAComfort logo are trademarks of MEGAComfort, Inc. All trademarks, service marks, logos, products, or service names are the property of their respective owners. All Rights Reserved. This Promotion is in no way sponsored, endorsed or administered by, or associated with, LinkedIn Corporation, Twitter, Inc., or any other third-party not specifically designated by Sponsor. Information is being provided to Sponsor in accordance to these Official Rules.